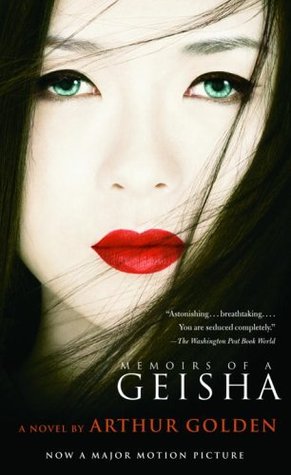 Title: Memoirs of a Geisha

I loved this book – and now I’m wondering how it had been sitting on my bookshelf for so long without me reading it!

One thing I noticed is that the reviews on Goodreads seem to be a bit polar – people either seem to really love it, or they really don’t.

Purists would probably be in the “really don’t love it” camp, because it isn’t REALLY a memoir – it’s a fiction that is written like a memoir. And to boot, it’s written by a western male author. So the general gist of the low-star reviews is that some of the content isn’t entirely “authentic” – but there are several who thought this was an ACTUAL memoir and were disappointed when they realised it wasn’t.

Personally, I don’t really give a crap. It is well-written, and the author has really done his homework. I also found the “pretend memoir” style very interesting – I felt it made the characters that little bit more real.

Who should read it? Anyone who is interested in Japanese culture, particularly Geisha culture. Also, anyone who enjoys historical fiction of the Philippa Gregory sort – I think it would appeal to someone who enjoys the intrigue, insights, and slightly messed-up relationships of that sort of historical fiction (personally I love all of that stuff).

This is not my picture, because I accidentally left mine cooking for a little too long – and the way they now look, “Zombie Meatballs” would be a better description :S (Mine are featured in this bento).

Here is the recipe! (From JustBento.com)

The only thing I can say is that I will not be using wombok cabbage next time – the leaves were way to flimsy. I’ll just get a normal cabbage (the leaves are slightly thicker on a normal cabbage, so I figure they’ll be less likely to fall apart).

Very yummy, but Hubby was decidedly creeped out by them haha – at least I know that I’ll get to eat them myself!

I’ve also managed to convert my Mum to bento lunches – she usually has 2 or 3 international students, and she makes lunch for them to take to school/uni/whatever, and when I showed her what I did for lunches she thought it was the best idea ever, so now she’s started doing that for the students 🙂 They like it a lot, as they’re all Chinese/Japanese, so the whole lunchbox-with-rice thing is very familiar for them, and they like that they get a mix of what they’re used to as well as new stuff.

I just realised I’d better get cracking again with my Foodie Fridays posts – I’m down to just 1 more queued post!

Ditto Tutorial Tuesdays, because I’m almost out of those too.

I’ve always enjoyed Bill Bryson’s writing style. I’ve read a few of his other books, and as always, there are a few things to note.

There are definitely some glaring inaccuracies (as about half the reviewers on Goodreads note). The main reason this misses on our 5 stars is because of these. The info that is correct is fascinating, and even the incorrect stuff is amusing.

As per usual with Bill Bryson, take everything with a grain of salt and take NOTHING as gospel unless you’ve confirmed it with another source.

This gets 4 stars because I like his writing style, and the essence of the information is reasonably correct. Some die-hard etymologists will disagree, and say that the inaccuracies mean this should get no stars at all… but pffft – it was a good read.

Who should read it? Anyone who is interested in language. Just don’t quote this for an assignment or anything.

This is from Sunday – previously, I haven’t tended to make bentos on weekends because I’ve never really needed to. But now, because of a musical I’m involved in has rehearsals on Sundays (and I can’t afford takeaway at the moment) I’ll be taking bento lunches to that.

Pretty much everything in this bento was leftovers – rice was frozen, enchilada mix too, onions were from the night before’s dinner, and the peas were just part of my huge collection of frozen veges. The only things I had to prepare fresh were the carrots and cauli.

Got a lot of compliments about this one today – everyone was saying how good it smelled and looked, and the enchilada mix stirred into the rice tasted absolutely AMAZING.

I will definitely be doing the enchilada-rice combo again 🙂

I had plans to do my own version of a how-to for curls, but I haven’t been able to tie down a friend/sister/mum to get them to be my model for the pictures. Then I saw this, and it’s practically the same thing, so I’ll let the professionals show you 🙂

I’m half-way done on the readings ready for my first week back at uni!

I like to get a week ahead before I start back, because I will inevitably get behind in my readings at some point, and being one week up means it takes a little bit longer to get there 🙂

Hubby has been taking the rubbish out AND changing the kitty litter without being asked! (See this post for my rant about those things). OMG WOW! I wonder how long this will last? Hopefully it’s permanent now, but we’ll see.

We’re also getting the new hose for the dishwasher today – so once we’ve got that, I’LL HAVE A WORKING DISHWASHER!!!! Oh this is definitely exciting 🙂 Minimal hand washing only! (It’s only a half-size dishwasher, so my larger pot and my cutting boards don’t quite fit, but it will do everything else). I am almost bouncing around I’m so excited about my dishwasher.

And the fact that these things are exciting would suggest that I have finally achieved “Adult-ness”.

Also, TEA – My mum bought me a packet of really yummy Chai tea, and B was cleaning out her pantry and found some T2 tea that she wasn’t drinking and gave it to me. I still don’t get how you can have T2 tea in your cupboard and not drink it – the idea is just so alien to me. But it’s really yummy – she hadn’t put the label in the jar with it, so I’m not sure what it is called, but I think it is one of their summer teas – it’s very fruity and quite sweet, I’m guessing it would make fantastic iced tea. I shall be trying this sometime this week I think.

Jacket has found a new favourite spot to be my study buddy – partly because the “artificial sun puddle” (i.e. desk lamp) currently lights a different part of my desk – because MY desk lamp still isn’t fixed, so I’m still using Hubby’s (which just isn’t working how I need it to).

Lamp isn’t currently on… but I think you can guess where it shines lol. The warm computer air probably also makes this a pleasant place to sleep.

His fur is also growing back all funny – his belly fur is back, and he’s got a long bit that goes over his shoulders and down along his spine, but his sides are still mostly short. He honestly looks quite amusing at the moment, but he gets so insulted if you laugh at him lol… then again, I’d get insulted if someone laughed at a bad haircut that I had too.

Other general “life happening” things – I finished Assassins Creed Revelations, and have therefore moved onto Assassins Creed III – but I’ll replay it again later in the year. I finished the storyline, but I didn’t finish all the “bits” in the game – like collecting all the stuff and renovating all the stores and everything. So as far as I’m concerned, I didn’t REALLY finish it properly yet. Then again, I still haven’t gotten around to going back and properly finishing Brotherhood either yet. I tried with II, but for the life of me I CAN’T FIND THE BLOODY 100TH FEATHER! I even resorted to game guides that show you where to find all the feathers, and very carefully followed through to collect them… And I still seem to be missing one. It’s the only thing I haven’t been able to complete. I gave up on it after the 4th play-through – hopefully the other games won’t be quite so stubborn.

I’ve made exactly 0 progress on Oblivion and Dragon Age though, and I’m thinking I may have to start those over (AGAIN! ugh) because I’ve totally forgotten where I’m up to :S I really need to get Oblivion on my computer rather than the xbox though, because I am definitely better at gaming on the computer rather than on consoles. I’m also more likely to play a game if it’s on my computer – Hubby tends to be watching TV when I want to game (i.e. weekends) so I can’t really use the consoles without forcing him to give up whatever he’s watching (usually some sort of car racing. There’s always some sort of car racing on).

Oh well, I should really get back to my uni reading.

Just when I was getting used to my posting time…

Has Daylight Savings just switched back or something? Because I have a post that says it’s schedule for 11am…

But it’s now 11:40 according to my computer and the post is still showing as “Scheduled” for 11am today.

*EDIT* and in a stranger turn of events, as soon as I posted this, the other post also went live. WTF wordpress???

So here we have the bento I actually ate on Friday (I just hadn’t gotten around to posting it until now).

We have the usual veges, plus some leftover spaghetti bolognese from last night’s dinner (about 1/2 cup pasta and 1/2 cup bolognese sauce).

The soup is a packet one that is a particular favourite of mine, but I don’t often get it because they are usually a bit pricey (they were on special this week so I got a couple).