I have been looking for some weekly schedule pages to use for outlining my schedule every week, and for the life of me I haven’t been able to find ones that I like!

I was looking for something with just a simple time schedule for each day, with a pretty background… and NOPE couldn’t find what I wanted. So I made my own! And now I’m going to share them with you guys 🙂

I’m using these to stick on the pinboard that is now living above our “crap collection point” at the end of the kitchen bench, so that Hubby knows when I’m at uni from week to week (some of my lectures, tutorials, and lab classes for next year aren’t the same every week).

Hope other people find these schedule pages useful too!

*EDIT* 5/2/15 – I wrote this post originally near the start of January (but queued it up for after the New Year New Life series finished), and after using the schedule/planners that are shown in the image, I realised a couple of things – I really needed a thing where I could write what we were doing for tea that night, and also that I didn’t really like one of the original patterns. The links are now for the new, updated planners with the new patterns. The background images come from: Bees, Owls, Spots, Chevrons. 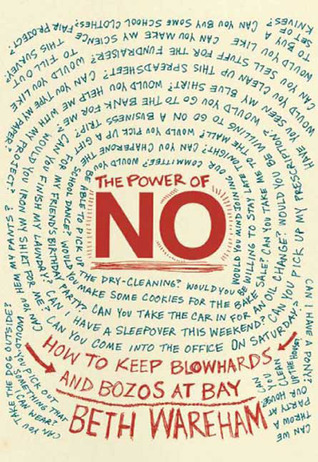 Title: The Power of No: How to keep blowhards and bozos at bay

I picked up this book expecting a far deeper and more useful read than it turned out to be.

Yes, the author has a great writing style – it was an amusing book, and I quite like her sense of humour. It’s a quick and easy read. But I really just didn’t enjoy it or find it at all useful.

I think that reading it right after this book may not have been the best idea, as it made the stark difference in the depth the books go into is very obvious.

I found the book very cynical (which is saying something, according to Hubby – apparently my cynicism would frustrate an atheist sometimes) and a little bit condescending. This was probably a book I needed to read 6 or 7 years ago, when I was still well entrenched in the idea that saying yes is the route to making everyone like you, not now when I’ve already moved well into the territory of saying no on a regular basis.
I had been expecting a lot more practical, useful information about how to say no in difficult situations – but it didn’t deliver. There was a little, but it was more about “this is when to say an outright no, this is when to use a more round-a-bout way”. I know that already, but I was looking for a little more help in the “round-a-bout no” area.

Who should read it? People who are just coming to realise that they’re allowing themselves to be used as doormats by saying yes to everything.